Well hidden by the end of a bumpy mountain road in the Northwest province of Jujuy, you will find one of Argentina’s many spectacular landscapes; the mountain of fourteen colors or Cerro de Catorce Colores.

The real name of this part of the UNESCO declared Quebrada de Humahuaca is Serranias del Hornacal. However, most people know the mountains as Cerro de Catorce Colores for their multiple color tones. 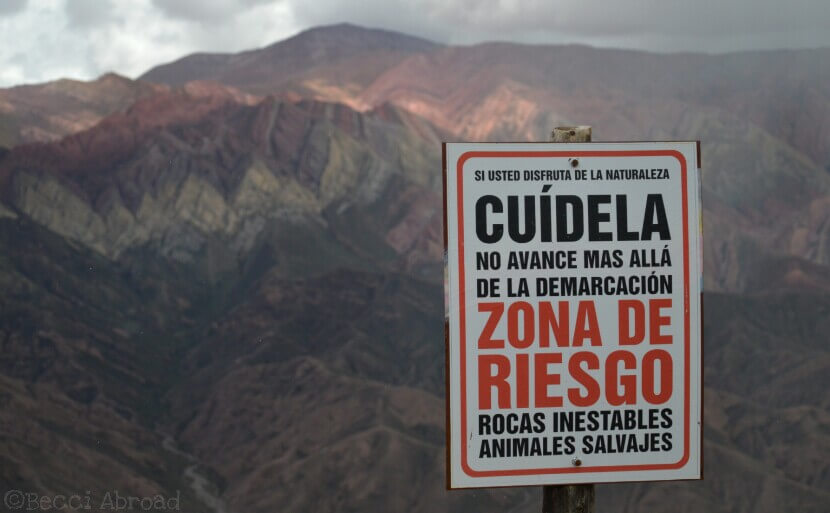 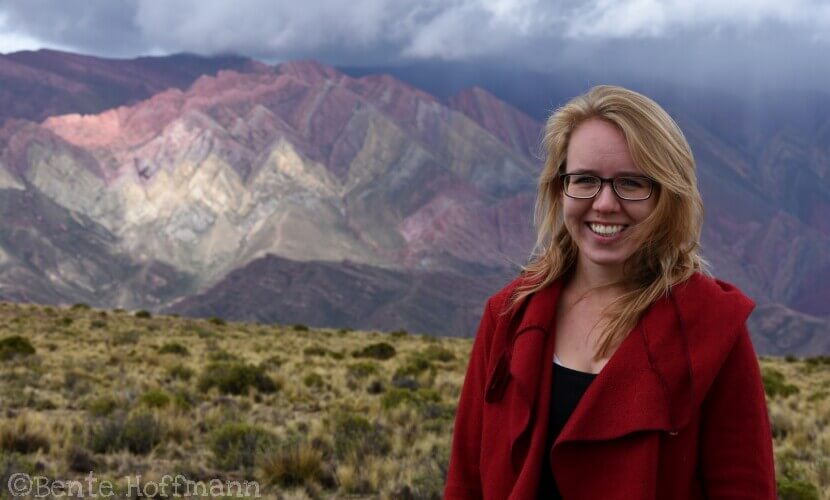 We visited Cerro de Catorce Colores in January which is the summer season in Argentina, and were surprised by how quickly the temperatures dropped as the car climbed up the mountains. By the time we arrived at the viewpoint overlooking the Cerro de Catorce Colores, the temperature had dropped to around 10-15 degrees, and huge gray clouds were covering the sky. I was very happy for having bought at least a small jacket, thus, suffered the fact that I had put on shorts that morning!

The colors on the mountains depend on how the lighting is at the time of visiting. Even though the colors might have been more bright on a sunny day, the gray clouds and the sun rays added a more dramatic feature to the photos, don’t you think? 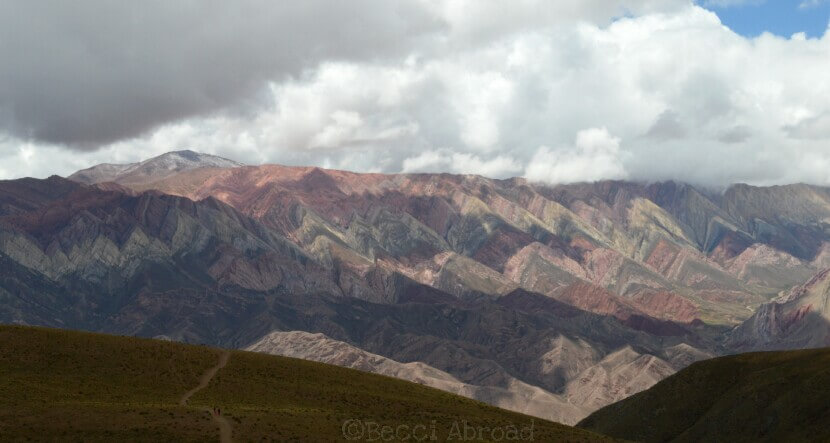 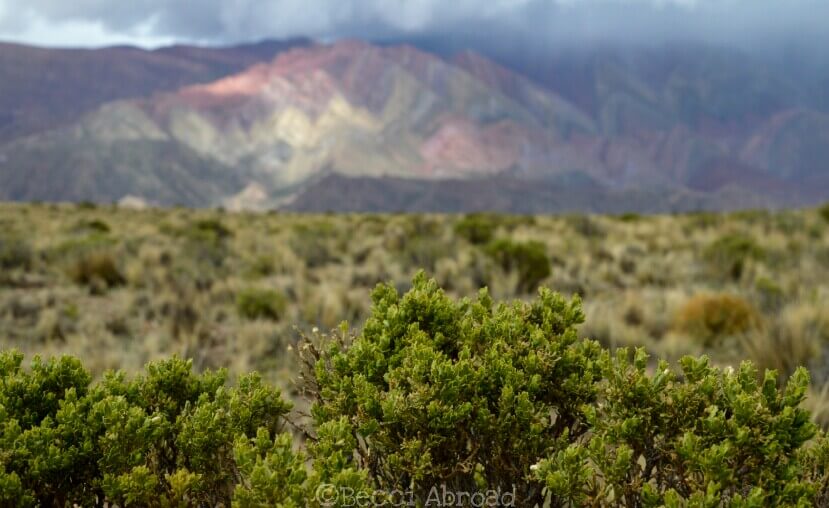 In the one hour that the drive to the viewpoint over the fourteen colored mountains take, you will climb 1,300 meters and reach the highest point at around 4,300 meters above sea level. Hence, be aware that altitude sickness might kick in, and you can start to feel dizzy and your physical state will for sure not be as you are used to. 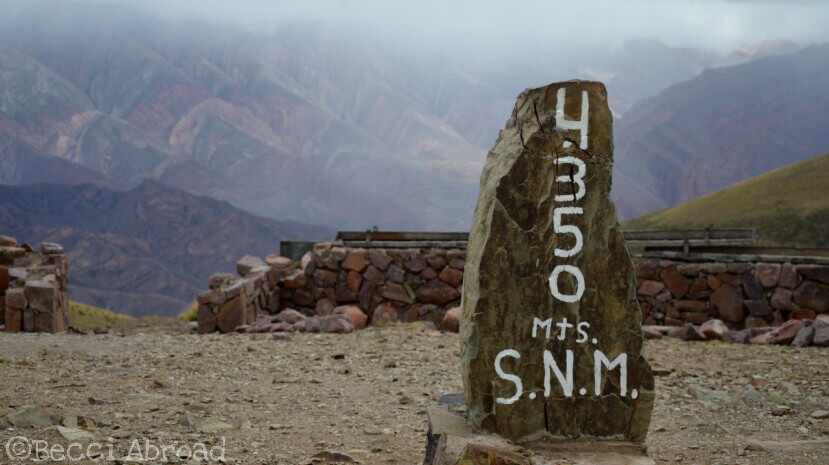 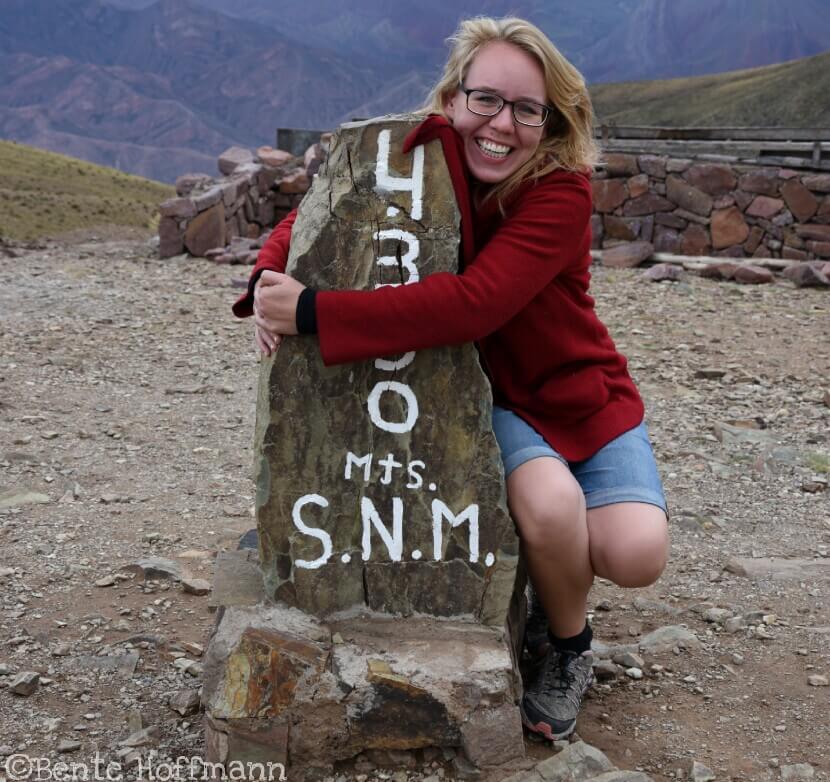 We had been joking about our preoccupations about the state of the roads in the Northern part of Argentina. Most roads were in a pretty good state; paved and well marked. The rental car hadn’t had any issues so far with the step turns… Until we headed toward the mountain of fourteen colors.

The road is unpaved and bumpy. Going around and about, higher and higher up as the surrounding landscape changed from low brushes to plain colored stone mountains. The views got more and more amazing as the car climbed up the unpaved roads. But Gosh, I was happy that it wasn’t me who was driving! 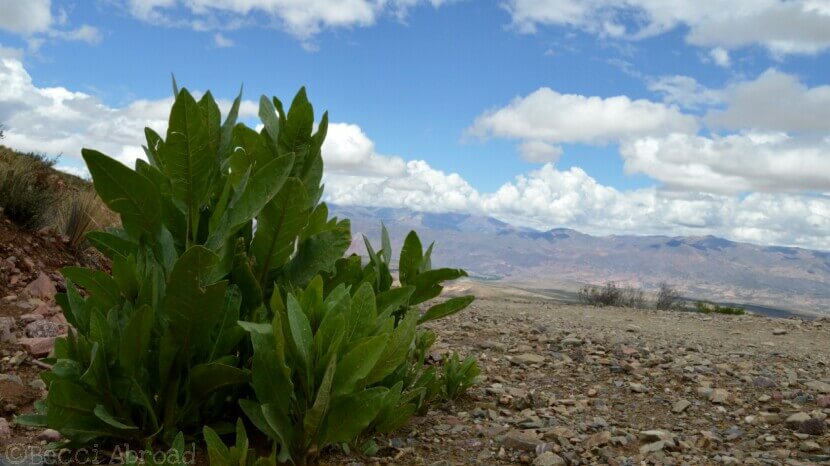 Towards the end of the road toward Cerro de Catorce Colores, you will have to stop by a small checkpoint which will charge you a small amount for entering to the viewpoint. Hence, remember to bring cash!

Follow the road the last bit, and you will arrive at the first viewpoint which basically is a parking lot. From there you can take a small walk/hike downhill to the second viewpoint overlooking the mountains. The walk will surely test your physical state in the heights! 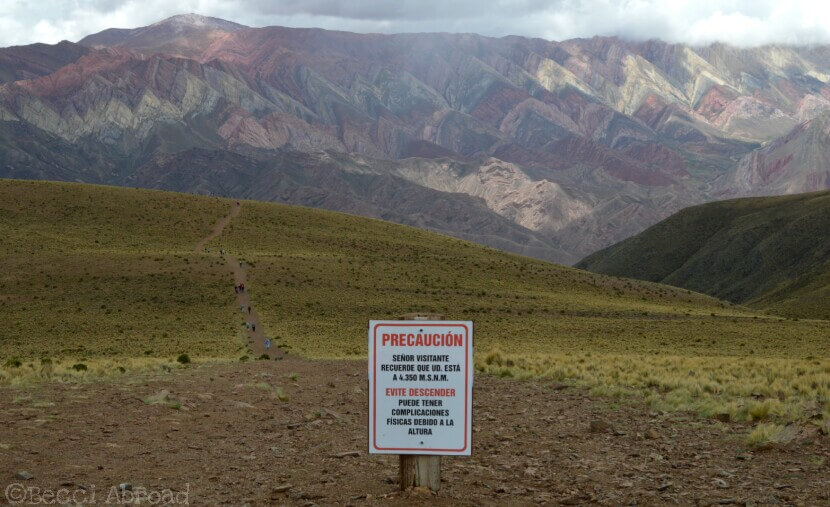 When you stand there at the viewpoint in the middle of the mountains of Quebrada de Humahuaca at 4,350 meters above sea level and overlook these multicolored mountains while the clouds passing drawing dark fluffy circles on the mountains and somewhere far away you can hear the thunder passing through the mountainsides.

Stand still, and take it all in. I believe, that this is where you start to understand how people million of years ago believed that these types of phenomenons were the Gods. 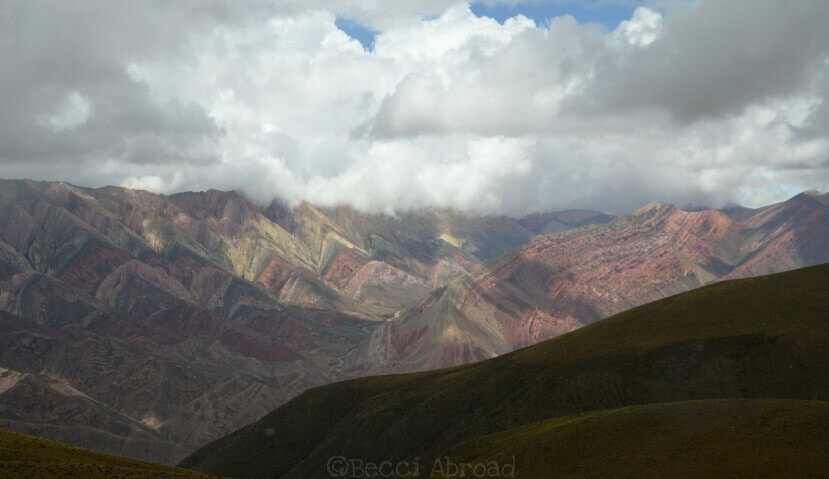 Make a stop on your way to Cerro de Catorce Colores

In the middle of nowhere on the way to Cerro de Catorce Colores, there was suddenly a… Cemetery! I don’t know what it is with cemeteries in Argentina but they have this thing of having some quiet astonishing cemeteries. Of course, the famous Recoleta Cemetery in Buenos Aires but also the one in Purmamarca.

This one was in style with the one in Purmamarca with colorful plastic flower decorations and all kind of different side thumbs. It was strange… and astonishing. There in the middle of nowhere with the mountains in the background. As always be respectful for both living and death if you want to visit a cemetery. 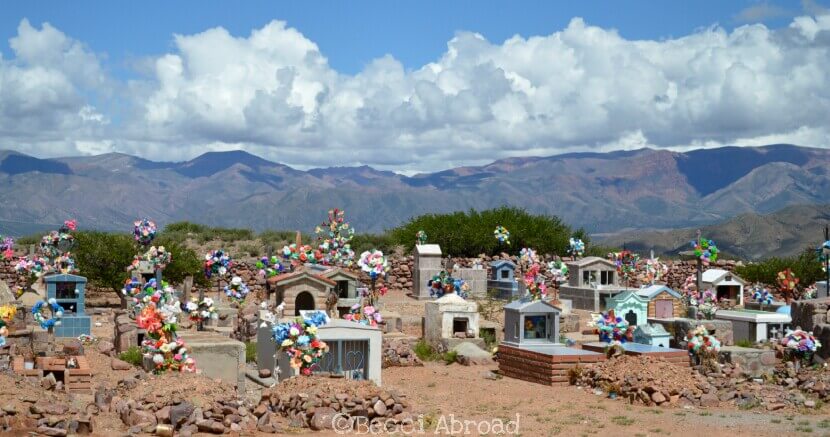 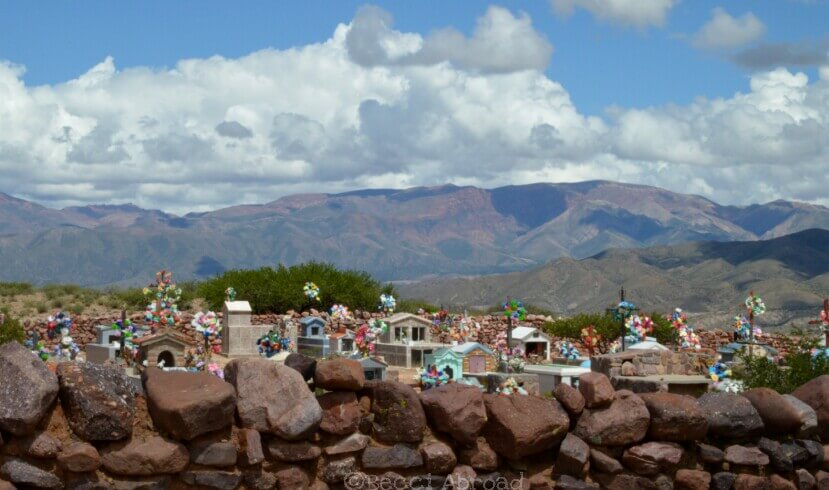 How to get to Cerro de Catorce Colores from Humahuaca?

Getting from Humahuaca to Cerro de Catorce Colores takes around 40-45 minutes – of course, depending on how many times you stop to take photos. The ride is around 24 km.

When arrived in Humahuaca, pass through the town until you meet a bridge crossing over the river, Río Grande. The bridge is located two blocks from the bus station of Humahuaca and is the only bridge in town that crosses the river. 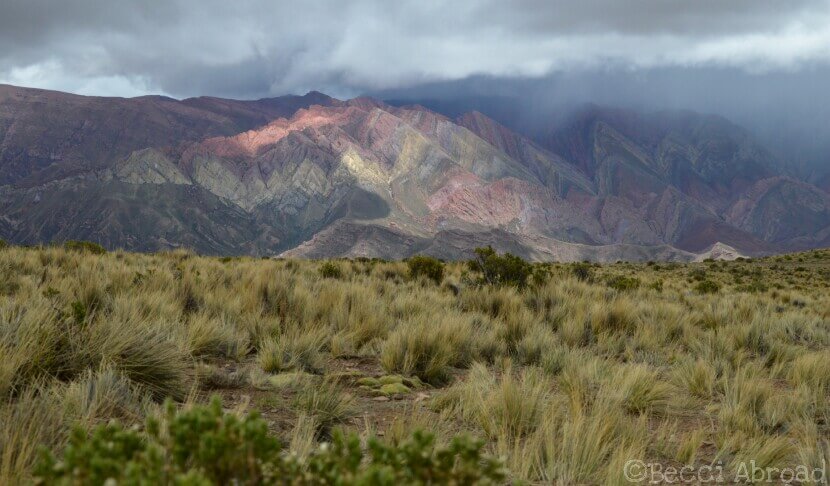 What about you? Would you like to visit Cerro de Catorce Colores? Or are maybe already planning to? Have you visited similar multicolored mountains other places in the world?

Feel free to share your experiences and thoughts in the comments below! I would love to hear from you! 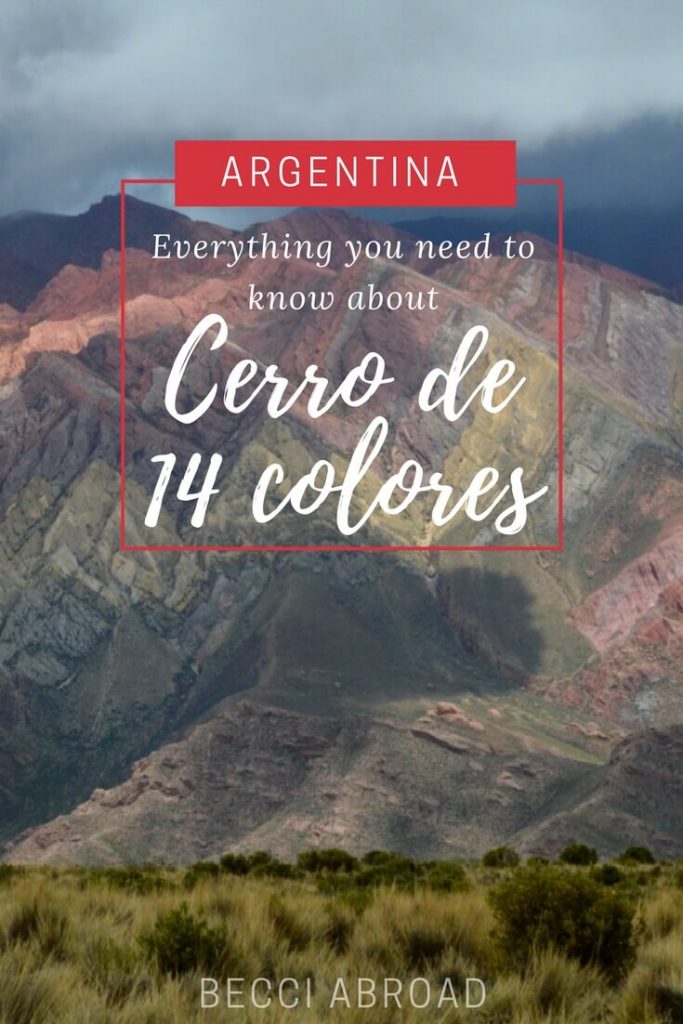 5 Spanish Phrases to Sound Like a Local in Buenos Aires

This site uses Akismet to reduce spam. Learn how your comment data is processed.

Hi, and welcome to Becci Abroad! My name is Rebecca and I'm the voice behind the site. Click here to read more about me

Didn’t find what you were looking for?